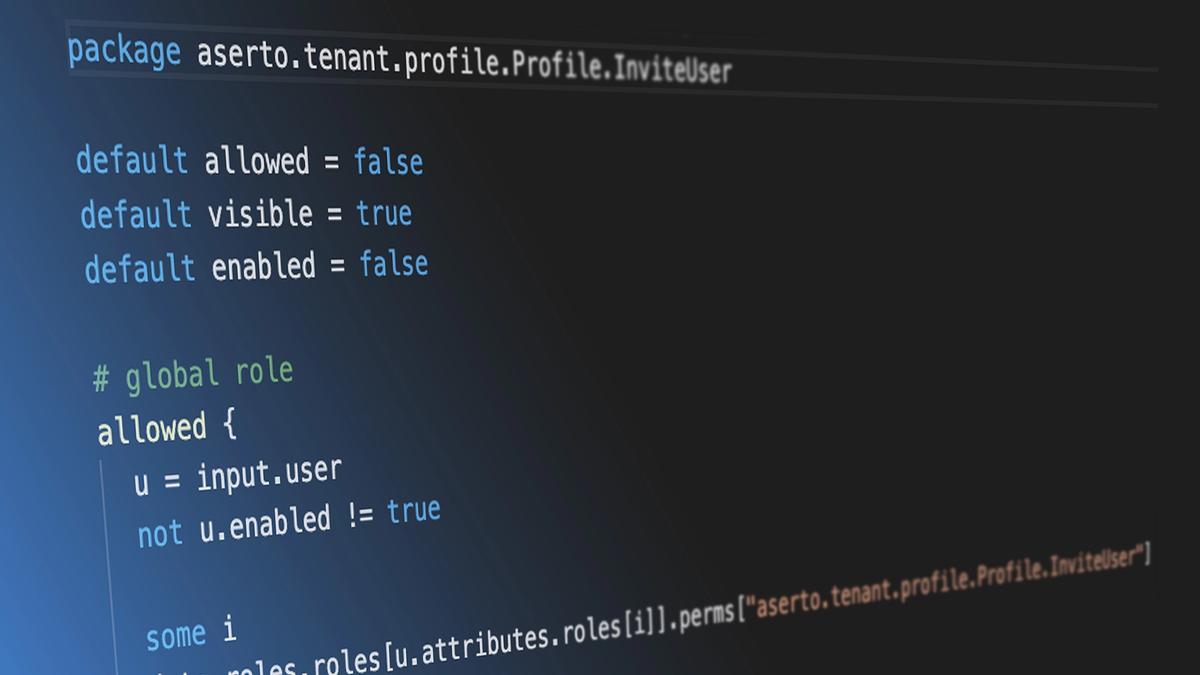 Aserto uses the Open Policy Agent (OPA) as the decision engine for evaluating authorization decisions. Rego is the policy language for defining rules that are evaluated by the OPA engine.

For engineers that are used to imperative languages like Javascript or Python, Rego can look a bit foreign. In this post, we give a few tips for how to get started with reading and writing Rego policies.

Rego isn’t a Turing-complete language for writing arbitrary programs. Rather, it’s a declarative language for defining rules - and can be thought of in the same way you think of a query language (like SQL). For all you language geeks, Rego is based on Datalog (a subset of Prolog), and contains some simplifying assumptions that make it easier to learn, easier to implement an evaluator for, and faster to execute.

Every Rego file is in a package. This defines the scope for the policy. Policy files that use the same package name are in the same namespace.

The result of a policy evaluation is a set of named decisions and their values.  Each decision is a header in a block. For example,

returns true for the allowed decision.

The inputs to a policy are all keyed in an input variable. Aserto automatically maps input.user to the properties of the user in the context of which the policy is evaluated, and input.resource to the resource that is passed in as an optional resource context.

Using values from the input document in the policy

In the policy below, allowed returns true only if the foo attribute on the input map is equal to the string "bar".

You can have more than one named decision in a policy. For example, in the policy below, there are two decisions (allowed and enabled), and enabled takes the value of allowed.

Expressions inside a decision block are “AND-ed” together

In the policy below, both conditions must be true for the allowed decision to evaluate to true.

Note that the conditions can be listed in any order - Rego doesn’t care about order when it comes to evaluation.

Blocks with the same name are “OR-ed” together

You can embed a data document named data.json in a Rego policy. This document is namespaced based on the directory it is in. For example, roles/data.json will show up as an object called data.roles in the policy evaluation context.

With the document below,

You could write a policy that accesses it in the following way:

The allowed decision would evaluate to true if input.hello was equal to "world".

Rego has set operators that make it easy to construct expressions over each value in an array. For example, if input.user.roles is an array that can contain one or more roles, the following policy will return true for the allowed decision if any of the roles in the array is equal to "viewer":

Note that writing an expression over an array means iterating over every value of that array - a bit like a database table scan. That’s why at Aserto we prefer Rego objects over arrays, since indexing into an object using a key is a constant-time operation.

Rego is an expressive policy language that can be used to construct a wide variety of RBAC and ABAC-style policies. We’ve gone through the most common patterns to get you started on writing authorization policies in Rego. Happy hacking!